Most interesting places to visit in Croatia

From ancient cities and national parks to majestic archipelagos and hidden coves, Dalmatia is full of wonders you can explore. Take a look at some of the most interesting ones! 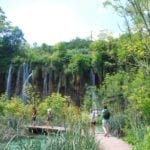 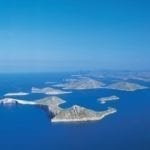 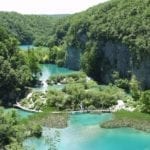 Croatian region of Dalmatia is the home to some of the most amazing places in the world, from stunning national parks bursting with wildlife to ancient cities that’ll leave you in awe. The island of Pag and camp Šimuni are located right in the middle of it, which makes them an ideal starting point from which you can embark on a variety of exciting trips and excursions. Here are some of the most beautiful destinations you just have to visit during your vacation in Croatia.

Plitvice Lakes are Croatia’s most visited attraction, and rightfully so. In the park you’ll find beautiful forested peaks and a variety of wild animals, as well as 16 mesmerising lakes that are interconnected by a myriad of monolithic waterfalls. The lakes are formed by natural travertine dams, and their colors range from turquoise and azure to blue, green and gray. You can explore the lakes and the surrounding area by a boat or by taking a walk through the lush forests that will show you the beauty of Plitvice Lakes’ flora and the uniqueness of its fauna. The national park is open all year long, and there are weekly excursions from camp Šimuni to Plitvice Lakes, so hop on!

Hidden within the medieval defensive walls lies Dubrovnik, one of the most glamorous tourist destinations in Croatia. Although the city is now known all around the world because it is the filming spot for Game of Thrones’ King’s Landing, Dubrovnik’s popularity surpasses the show, as it has been the pearl of the Adriatic for hundreds of years. With traditional orange rooftops, marble streets, baroque churches and magnificent palaces, the city will take you on an exciting journey through the history of Dalmatia, so don’t forget to bring your camera!

Built on a small Dalmatian peninsula more than three thousand years ago, the city of Zadar is an ideal holiday getaway because it offers you fantastic sightseeing attractions. You can explore a variety of ruins from the Roman period, see stunning medieval churches and experience the sights and sounds of the popular Sea Organ and the Greeting to the Sun. In the city of Zadar, you’ll also find a vast number of beautiful beaches along its coastline that are perfect for swimming and sunbathing. As Zadar is extremely close to camp Šimuni, we organise trips from the camp to the city almost every day!

Rovinj is an archipelago with 20 islets that are located around the Istrian peninsula, and its Old Town is one of the most important cultural and historical centers in Croatia. St. Euphemia’s Basilica is Rovinj’s most popular attraction, but if you come to the city, make sure you also explore the seven medieval city gates, as well as the Carera and Grisia streets, which are filled with street artists and art galleries. But there’s much more to Rovinj than culture and history. With its streets made of cobblestone, beautiful stairways and breathtaking arches, it is as much an architectural masterpiece as it is a cultural and historical monument.

Split is the second largest city in Croatia and the UNESCO-listed Diocletian’s Palace is the city’s top attraction. Built in the 3rd century, this magnificent palace is a giant maze of marble walkways that will show you the history of Ancient Romans in Dalmatia, share with you their culture and amaze you with unbelievable stories from ancient times. The palace itself guards majestic monuments of the Roman era, like the Peristyle and the Cathedral of St. Domnius, while its outskirts are places of leisure, relaxation and entertainment, with a seaside promenade and Bačvice, one of the most popular Croatian beaches.

With more than 140 islands, the archipelago of Kornati is one of the largest archipelagos in the Adriatic. Once used by local fishermen and shepherds, these rocky, arid and mostly uninhabited islets are now one of Dalmatia’s best scuba diving spots. They are also excellent spots for exploration because the entire area is filled with colorful reefs and different kinds of exotic fish. While we’re on the subject of exploration, the best way to do it is by renting a private sailboat or booking an excursion that will take you from camp Šimuni to the island of Kornati and all around the archipelago.

Situated along the Krka river near the city of Šibenik in the central part of Dalmatia, Krka National Park is a spectacular combination of mesmerising scenery, pristine nature and historic sites. The park is best known for its numerous waterfalls and natural pools you can swim and have fun in, but also for the surrounding nature that’s full of all kinds of animals. There are also lots of hiking trails around the waterfalls, which are ideal for exploration and taking amazing selfies with the waterfalls.

Croatia is full of wonderful destinations and majestic places, so book your stay in Camping Village Šimuni and start exploring the breathtaking gems of Dalmatia!