Mountains to climb in Dalmatia

If you’re looking to level up your vacation, come to Croatia and reach every peak! 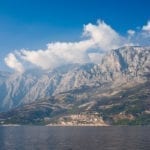 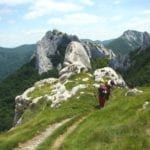 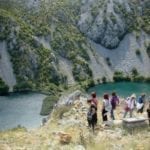 Most of Dalmatia’s mountains are protected nature parks or national parks. Not because of the spectacular views, but because of the endemic and unusual vegetation that flourishes there!

Biokovo is the highest and longest mountain in Dalmatia, as well as a nature park. It rises from the pass Dubci (Vrulja) and up to Rilić mountain towards the southeast.

The most notable peaks of Biokovo are Bukovac at 1262 meters, Šćirovac at 1618 meters, Sveti Ilija at 1642 meters, Kuranik at 1556 meters, Šibenik at 1450 meters, Sveti Jure at 1762 meters, Štropac at 1450 meters, Vošac at 1421 meters and Kimet 1636 at meters. Biokovo is a karst mountain made of limestone, great for avid climbers who will get the best out of this mountain from May to October.

Peak Sveti Jure offers a fantastic view of the Makarska coastline, the islands and Zabiokovlje. On clear days, it is even possible to see the mountain of Monte Gargano in Italy, that’s 250 km away!

Mosor is 25 kilometers long and its highest peak is called Veliki Kabal at 1339 meters. Compared to the other mountains, it could be considered small, but it has a long history of mountaineering. It was this mountain that served as a learning ground for some of Croatia’s most famous climbers.

Mosor’s name comes from a combination of Illyrian words “mol” (mountain) and “sor” (source). Since ancient Illyrians were engaged primarily in cattle-breeding and agriculture, it is quite understandable why they considered the mountain a source. It gave them all that is necessary for life – pastures and water from the spring of Jadra.

Mosor’s north and south are dominated by descending karst slopes. However, while the north slope is characterized by numerous scrapes and karst pits, the south slope is almost terraced. It has excellent marked paths, mountain huts and shelters, as well as a variety of routes for beginners and pros.

Velebit is the longest mountain in Croatia and its highest peak is Vaganski vrh at 1775 meters. It’s 10 to 30 kilometers wide, and its entire surface adds up to 2200 square kilometers.

It stretches for 145 kilometers along the Velebit Channel, part of the Adriatic Sea, from the Vratnik pass above Senj to the northwest to the canyon of the Zrmanja River in the southeast.

The entire mountain area is protected as a nature park, while Northern Velebit and Paklenica are both national parks.

Velebit is the home to the famous herbaceous endemic species, the Degenia velebitica, which is even featured on Croatian money. Velebit also holds the deepest speleological objects in Croatia – Luka’s pit that’s 1392 meters deep and the Slovak pit that’s 1320 meters deep.

There are many marked trails and paths on Velebit for mountaineers and they connect long-distance and transversal mountaineering and mountain huts on the mountain. Due to its peculiarity and visibility, it is necessary to mention Premužić’s path, which was built between two world wars and passes longitudinally through the North and Central Velebit.

Risnjak is another beautiful mountain and national park located in the hinterland of the city of Rijeka and Kvarner Bay, in the north-western part of Gorski Kotar.

The massive white rocks of Risnjak dominate over the greenery of its gorgeous forests. Because of its accessibility, Risnjak is a popular destination for walking, climbing and mountaineering, with plenty of hiking trails and educational paths.

Učka is the highest mountain of the Istrian peninsula and also a nature park. Its highest peak is called Vojak, at 1396 meters. The climb isn’t easy, but it offers a magnificent view of Istria, the Kvarner Bay with the Gorski Kotar Mountains and Velebit as well as Alps and Italy, which hikers can closely explore with telescopes.

Učka has been attracting mountaineers for the past 200 years, who have trekked through many marked hiking trails. The most popular mountaineering destinations are Vojak, Suhi vrh, Veli Planik, Korita and Sisol.

With more than 50 climbing trails of various difficulties, it’s no wonder Učka has been a favorite destination for alpinists since 1931.

Have you already picked your next mountain? View accommodation offers of Camping Village Šimuni, book your vacation and get ready to conquer it!