If you ever wanted to know how a place tastes, try this highly regarded Croatian cheese that truly captures Pag’s essence. 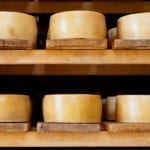 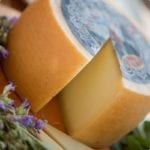 Pag cheese (Paški sir) is one of Croatia’s most beloved cheeses produced exclusively on the island of Pag. Croatians love it and every foreigner who tastes it, can never forget its distinctive aroma. It is a hard cheese made from the milk of the Paška sheep, a breed of sheep indigenous to the island of Pag.

There is no telling how long this cheese has been around, but there is a recording from 1774 when a traveller Alberto Fortis wrote down that cheese is one of the most important products of Pag.

Island of Pag is famous for its barren land, mostly made of rock, so it doesn’t seem like a place where sheep herding would prosper, but nature has its ways. There might not be a lot of grass on Pag, but there is plenty of wild growing aromatic herbs and mediterranean spices which serve as food to the Pag sheep. These herbs are also a product of Pag’s particular geographical conditions – the wind carries salt and distributes it on the plantlife.

The sheep consequently lactate milk that is like no other, infused with salty aromas of their main diet. Because of the diet and the sheep’s lactating limitations, the milk output is very low, so to make only one Pag cheese, it takes milk from about 10 sheep.

Its savory flavour is enhanced by rubbing the cheese with ash and olive oil during production.

The salty, spicey aromas are best when paired with some prosciutto, grapes and a deep tannin-packed red wine, also providing your palate with a mouthful of traditional Dalmatian tastes.

There are two types of Pag cheese, young and mature. Young cheese has matured for up to a year, and the mature one is over a year. There are also differences in taste, the young cheese has a mild taste and is lighter in colour, and mature cheese is more spicy and darker in colour.

But it’s not only Croatians who appreciate the special taste of this unique cheese. This September Pag cheese won prestigious awards at the Global Cheese Awards fair held in Britain and was declared the Best Hard Sheep-Milk Cheese in the World. Pag cheese received a gold medal for the best cheese produced from sheep’s milk and the best delicacy made of sheep’s milk. In November last year in Spain’s San Sebastian at the World Cheese Awards, it won the Super Gold Medal for the Best Hard Sheep-Milk Cheese in Central & Eastern Europe.

If you’re coming to Šimuni, don’t miss a chance to try Pag cheese right where it’s made.

You can buy Pag cheese in bigger supermarkets on Pag or try it in our restaurants at camp, but if you’re interested to buy it straight from the artisans that make them, here are some tips. Buy Pag cheese at Paška sirana shops in Pag, Novalja and Povljana, Gligora sirana shop in Kolan and MIH sirana in Kolan.

Some manufacturers even hold tours of their cheese production lines and cheese tastings, so you can get a behind the scenes look of how delicious cheese is made.

If you’re a cheese lover who likes to try out new delicacies, don’t miss out on The Cheese Feast in Kolan, held on the last Friday in August. Besides loads of cheese, it includes a Day of open doors in local cheese factories and autochthonous menus in restaurants.

Book your vacation and get ready for a gourmet experience!