Take a look at a couple of simple games that will make even the longest of trips pass in the blink of an eye. 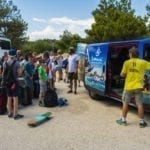 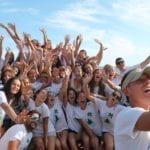 Taking your family on a road trip is always an awesome experience, and it’s even better if you find a way to entertain your kids and yourself while you’re travelling. Here are 6 great games you can play during your trip to make the time pass a little bit faster!

I spy is a road trip classic. This simple quiz has a single rule – one player starts a sentence with “I spy with my little eye something…”, and then gives a simple clue about an object he sees. For example: “I spy with my little eye something red beginning with the letter S”. Other players then have to guess what the object is, and the one who guesses it first wins and is the next one to ask a question.

Simon says is one of the most entertaining games you can play while you’re travelling. One player is picked to be Simon, and whatever Simon says, other players have to do it, but only if he used the right form. For example, if the player who’s picked to be Simon says: “Simon says clap your hands”, everybody has to clap their hands, but if Simon just says “Clap your hands”, that’s not the correct form and other players mustn’t do it. If other players don’t follow the instructions correctly, they’re out of the game and have to wait until there’s only one player left.

Tunnel is an extremely simple and fun game you can play with your kids. There is only one rule – when you enter a tunnel, everyone in the car (except for the driver) has to hold their breath. The one who can hold its breath the longest or manages to hold breath until the car leaves the tunnel, wins.

If you and your kids are big fans of music, name that tune is a perfect road trip game for you. It’s really simple to play, one player starts by singing, whistling or humming a song, and others have to guess the name of the song. The player who guesses the song is the next to sing.

This game is completely different than all others on this list. In storytelling, the goal is not to win, but to keep the game going for as long as possible. One player starts the game by saying a sentence that serves as a beginning to a story, for example: “Once upon a time, a mighty dragon lived in cave on the hill“. Next player continues the story with another sentence, and that goes on until the story becomes complete or too ridiculous. If you have a pen and paper, write down the story so you can read it later and laugh at all the silly things you came up with.

There are loads of road trip games involving licence plates, but one of the most popular ones is the collector. The goal of this game is to guess the country or the state a specific licence plate comes from. If a player’s answer is correct, he can write it down on a piece of paper and gets a point. At the end of the trip, the winner is the one with the most points. This game is not just endlessly entertaining, but also very educational because your kids can learn quite a bit about different countries, states and counties.

Now that you know how to play all these awesome games, the only thing left to do is to book your perfect vacation and take a trip to Camping Village Šimuni!