A 12 000 year old mystery, The Pag triangle is a regular case from the X-files. The truth is out there, explore it yourself. 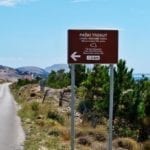 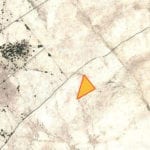 The Pag triangle is a formation in the shape of an isosceles triangle located on the Tusto čelo hill, near Novalja, on the island of Pag. Since its discovery, the unusual formation has been a hot topic among scientists trying to figure out its origins.

The triangle was discovered accidentally in 1999 by a Croatian geodesist Zdenko Grbavac while he was performing geodesis work for a quarry. He noticed a triangular shaped formation of a much lighter color than the rest than the Tusto čelo hill and measured it. He found that the formation was a proper triangle with two of its sides 32 meters long and the third 22 meters long. After further examination, it has been concluded that the properties this particular rock formation has are unlike any of the other surrounding rocks. What made this triangle even more interesting were 30 centimeter holes on each side of the triangle for which nobody could offer an explanation. This discovery attracted a lot of attention of the media, ufologists and tourists, all of who flocked to the triangle site.

Geological examinations concluded that the rocks inside the triangle formation are different in color due to being exposed to extreme temperatures in the past. It is assumed that this megalithic formation dates back 12 000 years.

Many experiments later, still no one could reach a conclusion about the origins of the Pag triangle, which gave wave to many theories. One theory states that the triangle is a consequence of an alien spacecraft landing, another one claims it is a remnant of a highly-evolved civilisation, and the third one advocates nature, saying it is all just a result of the wind, salt and rain.

Instant fame brought many people to the site, who, out of superstition or their belief in the supernatural or healing powers of the rock formation, took a lot of the rocks home, leaving the formation partially barren. For these reasons, since 2000, the area is under protection from the government.

Even though this phenomenon was covered in a couple of books and the site has been visited by more than a half of million tourists, the people of Pag don’t really consider it big deal and it is not featured as one of the island’s prominent attractions. However, if you’re interested, you can find it by following the road sign on the Prizna-Žigljen road and reach it continuing on a dirt road about 1800 meters long.

Which theory do you believe? Browse accommodation offer in Camping Village Šimuni, come to Pag and craft your own story!